Send article by email to friends
Print
Save

Posted at: Wenesday - 28/11/2012 09:44 - post name: sonlatourism
On November 27th, 2012, the inaugural meeting of the Tourism Advisory Board (TAB) took place in Hanoi within the work plan of the Environmentally and Socially Responsible Tourism Capacity Development Programme (known as the ESRT Programme, funded by the European Union).
The focus of the meeting was to bring together the key players from the private and public stakeholders of the tourism industry and to provide an open and ongoing dialogue to better promote and lobby the development of trade, commerce and investment in Vietnam’s tourism industry. The mission of the TAB is to increase Vietnam’s competitive advantage as a sustainable tourism and travel destination by leveraging the country’s public and private resources, thus creating a cohesive and comprehensive industry strategy.
In his opening remarks, Mr. Nguyen Van Tuan, Chairman of Vietnam National Administration of Tourism (VNAT) announced the official establishment of the Tourism Advisory Board and stressed that the public private partnership will be a major breakthrough in professionalization of the Vietnam tourism industry, as stated in the Strategy for Tourism Development in Vietnam to 2020, with vision to 2030. Moreover, it will enhance Vietnam’s competitiveness and make it an attractive global destination. 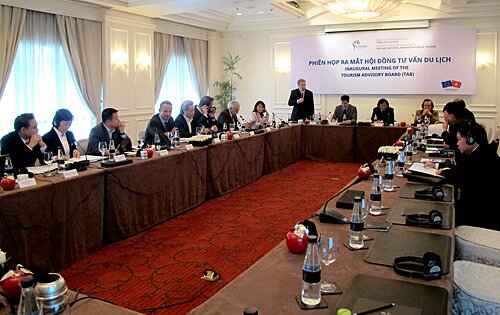 The Chairman said that both Ministry of Culture, Sports and Tourism (MCST) and Vietnam National Administration highly appreciates this initiative and also thanked the European Union Delegation for their strongly support and considering the TAB’s establishment an important activity in the Environmentally and Socially Responsible Tourism Capacity Development Programme.
“The Advisory Board will allow MCST and VNAT to benefit from the real expertise of industry representatives, to leverage financial and human resources, and ensure that the government’s administrative framework is aligned with the strategies and objectives of the industry at large”, said Mr. Bryan Fornari, Deputy Head of Cooperation and Development Section, Governance and Economic Cooperation of the EU Delegation. According to Bryan, the EU believes that in enabling active dialogue the TAB will effectively increase Vietnam’s competitive advantage as a travel and tourism destination and achieve much needed improvements in the responsibility that both public and private sectors take towards this vital sector.
Following the Chairman of VNAT, Ian Lyne, the Team Leader for the TAB Project of the ESRT Programme expressed to the selected members of the TAB, the significance of gathering some of the most influential stakeholders and the dramatic contribution that could be made by the group, in mainstreaming tourism as a key sector of Vietnam’s economy.
The TAB consists of more than 20 “big-guns” in the tourism industry, ranging from CEOs of hotels, travel agencies, transportation businesses, chairmans of tourism associations, leaders of training institutions, representatives from Vietnam Chamber of Commerce and Industry and EuroCham, to high ranking officials from the public sector.
The creation of the Tourism Advisory Board was initially recommended by the Tourism Working Group (TWG) at the Vietnam Business Forum in 2009 and was eventually adopted by VNAT and funded by the European Union via the ESRT Programme in 2010. Such forums for exchanging information and knowledge in the form of Tourism Advisory Boards contributed significantly to the development of successful tourism destinations over the world and effective utilisation of their resources.
The next meeting of the TAB will take place in early 2013.

TAB PROFILE
Mission Statement: To increase Vietnam’s competitive advantage as a sustainable tourism and travel destination by leveraging the country’s public and private resources to create a cohesive, comprehensive industry strategy. The TAB will provide advice to VNAT on issues related to tourism development.
Detailed Objectives:
- Promote and lobby the development of trade, commerce and investment in Vietnam’s travel and tourism industry
- Participate in the development of tourism public policy through an open and honest dialogue between private companies, state owned enterprises and the government
- Provide a forum for industry leaders and public officials to identify and discuss commercial, environmental, educational and sustainable industry goals
- Assist in the national branding campaign and a sustainable destination marketing program
ABOUT THE ESRT PROGRAMME
The ESRT Programme is the biggest tourism technical support programme to Vietnam funded by the European Union with 11 million Euros and the Vietnamese Government contributes 1.1 million Euro, implementing from 2011 to 2015. Ministry of Culture, Sports and Tourism is the Executing Authority, while Vietnam National Administration of Tourism is the Implementing Agency.
Key strategic pillars of the ESRT Programme: Policy Support and Institutional Strengthening; Establishing useful Organisational Structures and Networks between the public and private; Developing a Skilled Tourism Labour Force; Improvement of Tourism Competitiveness; Awareness Raising for Responsible Tourism.
Key:

You must login to use this feature